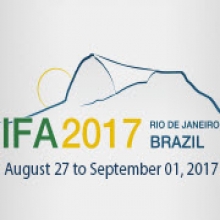 It is our great pleasure to welcome you to the 71st IFA Congress.

The 2017 Congress will take place between August 27th and September 1st, in the world-renowned city of Rio de Janeiro.

Rio is a truly unique location, combining the attributes of one of the most famous international tourist destinations as well as serving as a focus point in the country and the region for several key economic markets, such as the oil and telecommunication industries.

The welcoming environment and efficiency of the city have led it to be chosen as the host of the 2014 FIFA World Cup and the upcoming Olympic Games in 2016.

The 71st Congress will be held at the Windsor Hotel and Event Center, a recently built state of the art facility, which, in addition to the convention center, boasts three hotels internally connected to each other.

The entire structure is located literally across the street from the beach, and very short distances from other hotels and shopping/entertainment areas in the neighborhood of Barra da Tijuca, one of the fastest growing regions of the city.

In cooperation with IFA’s Permanent Scientific Committee (PSC) we are in the process of finalizing an exciting and informative program for the Congress, covering the main subjects which allow for a healthy debate among all those attending the event.

Participants, as well as the accompanying persons, will also enjoy a wide variety of social events and tours throughout (and, in certain cases, beyond) our beautiful city.

We also hope you take some time before or after the congress to get to know other areas of Brazil (pre and post congress tours will be offered for participants and their family members).

We very much look forward to seeing all of you in Brazil!

Gustavo Brigagão
and his colleagues from the local Organizing Committee