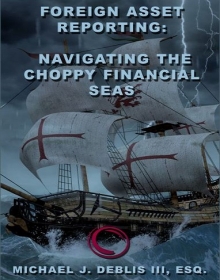 This book covers foreign asset reporting like no other. It is intended for a broad
audience: from tax professionals (tax preparers and tax attorneys) to those without any
formal background in tax or tax law. Its beauty lies in its simplicity. Great effort was
taken to simplify complex rules by breaking them down into their individual elements
and relating them to everyday things, with the overall goal of making them easy to
understand.

While critics might argue that this approach oversimplifies what is otherwise a
technical and abstract area of tax compliance, I disagree with the premise that
complicated ideas cannot be translated and simplified in such a way as to make them
accessible for everyone. Scientists, engineers, and doctors have been doing this for
centuries.

The most famous scientist of all-time might have said it best, “If you can’t explain
it simply, you don’t understand it well enough.” If Albert Einstein was able to reduce as
complicated a concept as “mass-energy equivalence” into an easy formula (E=mc2) then
U.S. international tax compliance should be a prime candidate for simplification.
Relying on this philosophy, I attempt to remove the “struggle” and “frustration”
that have become synonymous with foreign asset reporting. Hypotheticals, references to
pop culture, puns, and metaphors are a hallmark of this book.

This book is divided into four parts. Part one begins with a general overview of
U.S. worldwide taxation and provides some history about the Foreign Bank Account
Report (FBAR). It delves into the requirements of the FBAR, with a special emphasis on
what accounts are considered “financial accounts.”

This book does not shy away from cutting edge issues that are keeping taxpayers
lying awake at night. Instead, it tackles them head on – even those for which the IRS has
issued little or no guidance. Going beyond the FBAR, this book covers Form 8938 in
great detail and discusses the “other” foreign asset reporting forms that are easy to
overlook.

A special section is dedicated to tax crimes that the government relies upon inprosecuting offshore bank tax cases. The final section covers the IRS’s voluntary disclosure programs for those with unreported offshore accounts. It discusses the philosophy behind voluntary disclosure so that the reader understands the genesis of the program and why it exists. The emphasis is on the newly expanded streamlined procedures and the Offshore Voluntary Disclosure Program (OVDP). This book is a “must read” for those who specialize in foreign asset reporting and for those who have begun their maiden voyage into the choppy seas of foreign asset reporting.