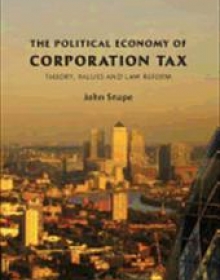 Excellent technical writing on corporation tax abounds, but it tends to be inaccessible to the public lawyer, the political theorist, or the political economist. Although recent years have seen not only an explosion in public law scholarship, but also a reawakening of interest in interpretative political theory and political economy, the potential of these perspectives to illuminate the corporation tax debate has remained unexplored. This important work reconciles these disparate strands of scholarship and contributes to a new way of understanding and conceptualizing the reform of the law relating to corporate taxation. Drawing on important developments in public law scholarship, the study combines elements of political theory and political economy. It advances a new interpretation of corporation tax law as an instrument of rule, through the maximization of a nation's economic potential. The book shows how corporate taxation belongs at the center of any discussion of economic globalization, not only because of the potential of national tax systems to influence inward investment decisions, but also because of the potential of those decisions to shape the public interest that those tax systems might embody. Following public law and politics models, the book looks afresh at the impact of the UK's political institutions, the processes of its representative government, and the theory that molds and orders the values that the corporation tax code contains. This is a timely exploration of cutting-edge issues of public policy.