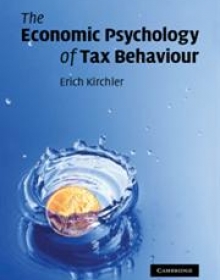 The Economic Psychology of Tax Behaviour

Tax evasion is a complex phenomenon which is influenced not just by economic motives but by psychological factors as well. Economic-psychological research focuses on individual and social representations of taxation as well as decision-making.

Featuring chapters on the social representations of taxation, decision-making and self-employed income tax behaviour, this book will appeal to researchers in economic psychology, behavioural economics and public administration.