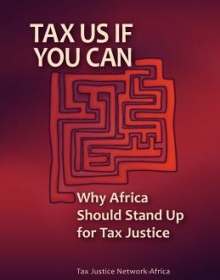 This short introduction to issues of tax justice sets out the meaning and causes of tax injustice and offers options for a more just future. In Africa, as elsewhere, tax revenues are essential for establishing independent states of free citizens but many commodity exports from Africa are exempt from taxation. Taxes in Africa are often regressive, and tax and customs administration ineffective.The 'tax consensus' promoted by multilateral agencies, such as the World Bank and the International Monetary Fund (IMF), has influenced tax policy in Africa and led to a reduction in government revenues in many countries. Multinational companies and their advisers exploit tax loopholes and secrecy jurisdictions enable tax evasion. The book explores the role of governments, parliaments and taxpayers, and asks what all stakeholders should be doing to help achieve tax justice. Options include raising awareness around tax issues and promoting a culture of tax compliance; increasing tax transparency among governments and multinational companies; increasing international cooperation on tax matters; and enhancing international assistance to support African governments in improving their tax affairs.