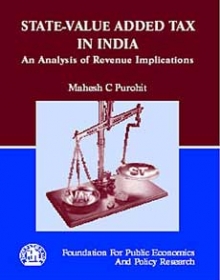 "Sales Tax, which has come to occupy a very important place in the fiscal structure of all the states, has now been replaced by State Value Added Tax (State-VAT).

As is the case in most other countries, this is being done to remove the deficiencies in the existing Sales Tax.

In the past, considerable effort have, in this regard, been made by the committees of States' Finance Ministers of 1995 and 1998 as also by the Committee of Chief Ministers of 1999. In addition, the efforts of the Empowered committee and the facilitation by the Union Government, have enabled almost all the states to go in for State-VAT.

Introduction of sate-VAT by all the state is indeed a paradigm shift and an important step in tax reform at the sub-national level. It was, however, expected that such a move might cause some implications for the revenue of the states. Also, this being a multipoint Sales Tax with set-off, it could bring a Large number of taxpayers in to tax net. This might, therefore, raise issues of Cost of compliance as also of corruption, if not implemented according to the principles of VAT.

This study, therefore, is the first attempt to empirically examine the Effects of introduction State-VAT to replace the existing Sales Tax in the states. For an in-depth analysis it takes a case Study of Rajasthan and recommends Measures needed to improve governance from the point of tax department of all the states as also from the view of taxpayers.

The study also recommends measures needed to improve the structure of VAT both in the short-run and in the medium run.

Finally, the study recommends as a measure of second-generation Reforms to have just one comprehensive State-VAT (by merger of Cen VAT into State-VAT) and some restructuring of State Taxes."

Dr. Mahesh C. Purohit is Director of the Foundation for Public Economics and Policy Research.

He has undertaken many international assignments that include his working for the UNDP as an Advisor in Tax Policy and Chief Technical Advisor and with the IMF as a Member of a Fiscal Mission. He has also worked in advisory capacity in Bhutan to help reform their tax system.