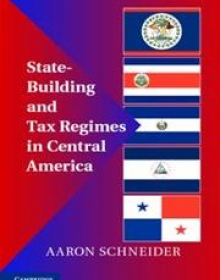 In Central America, dynamic economic Actors have inserted themselves into global markets. Elites atop these sectors attempt to advance a state-building project that will allow them to expand their activities and access Political power, but they differ in their internal cohesion and their dominance with respect to other groups, especially previously constituted elites and popular sectors. Differences in resulting state-building patterns are expressed in the capacity to mobilize revenues from the most dynamic sectors in quantities sufficient to undertake public endeavors and in a relatively universal Fashion across sectors. Historical, quantitative and qualitative detail on the five Countries of Central America are followed by a focus on El Salvador, Honduras, and Guatemala. The greatest changes have occurred in El Salvador, and Honduras has made some advances, although they are almost as quickly reversed by incentives, exemptions and special arrangements for particular producers. Guatemala has raised revenues only marginally and failed to address problems of inequity across sectors and between rich and poor.