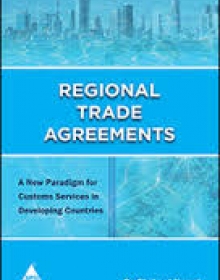 his book scans the entire spectrum of customs role and functions by looking at the current state of affairs in various developing countries and also in terms of the new technology driven tools and measures that have been either recently introduced by the World Customs Organization (WCO) or are on the anvil in the near future. Through this book, the author has also raised some serious questions on the challenges faced by the Customs services in developing countries in respect of their capacities and skills for adopting all Trade Facilitation related measures mandated under a Free Trade Agreement.

Dr. Shrikant Kamat started his professional career in July 1994 as an Inspector of Central Excise at Mumbai under the Ministry of Finance, Government of India. He spent a decade in Government Service where he had an occasion to study from close quarters, the functioning of the Excise and Customs Administration in India, one of the leading Developing Economies of the Twenty first century. He also pursued his Master’s Degree in Financial Management (MFM) and his Law Degree (LL. B) of the Mumbai University whie in Government Service.

In the year 2005, Dr. Kamat moved into the consulting profession and was associated with the leading Tax Consulting Firms in India such as Ernst & Young, at a Senior level, in the area of Indirect Taxation including Customs laws. Presently, he is the National Partner for the Taxation, Transfer Pricing & WTO Practice of one of India’s leading Legal Services Firm. He also holds the license to practice as an Attorney (Advocate) and occasionally appears in the Tribunals and the Bombay High Court in Customs, Excise and other Taxation matters.

Dr. Kamat obtained his LL.M degree in Business Law from the Mumbai University in 2006. He subsequently registered for the Ph. D Degree of the said University in early 2007 under the guidance of Dr. Nilima Chandiramani and was conferred with the Doctorate in Law in July 2012. The present book by Dr. Kamat has drawn a considerable portion from his Ph.D Thesis titled “Role of Customs under the WTO Regime with Special Reference to Free Trade Agreements by Developing Countries”.