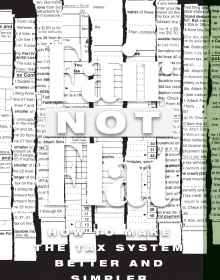 Everyone knows that the current tax system is unfair. Some of the richest people in America pay no tax, while a huge share of the tax burden falls on the rest of us. A mere glance at the tax code confirms that it is far too complex, with volumes of rules that no ordinary person could possibly comprehend. What is to be done? Some conservatives have called for a so-called flat tax.

But a flat tax is not necessarily a simple tax, and "flat" means "more" for most taxpayers: a rise in middle-class taxes to finance tax cuts for the rich. Is there another choice? In clear, easy-to-understand language, Edward J. McCaffery proposes a straightforward and fair alternative. A "fair not flat" tax that is consistent and progressive would tax spending, not income and savings.

And if it were collected at its lower levels through a national sales tax, most people would not have to file a return. A supplemental tax on spending for the wealthiest individuals would make the national sales tax progressive. Under McCaffery's system, a family of four would pay no tax on their first $20,000 in spending, and 15 percent on the next $60,000. Only the few families who spend more than $80,000 a year would be subject to the supplemental tax.

Necessities would be taxed less than ordinary and luxury items. No one would be taxed directly on savings. The estate and gift or so-called death tax would be abolished, for the simple reason that dead people don't spend. The "fair not flat" tax would fall on heirs when and as they spend their good fortune. Perhaps best of all, most Americans would not have to fill out tax returns. Simpler, more efficient, fairer, and more reflective of America's current social values, McCaffery's "fair not flat" tax could help get us out of the tax mess that politicians and special interests have gotten us into, improving the whole country in the process. Read Fair Not Flatto find out how.

"In Fair Not Flat, Mr. McCaffery lays out the case for a consumption tax. He does so in a reader-friendly way, presenting his argument with very few footnotes, equations or technical terms. The consumption of the book, so to speak, is not at all taxing. And its argument is well worth pondering."Bruce Bartlett, Wall Street Journal