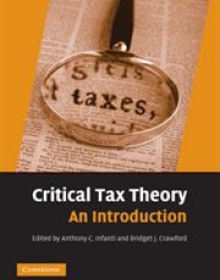 Tax law is political. This book highlights and explains the major themes and methodologies of a group of scholars who challenge the traditional claim that tax law is neutral and unbiased.

The contributors to this volume include pioneers in the field of critical tax theory, as well as key thinkers who have sustained and expanded the investigation into why the tax laws are the way they are and what impacts tax laws have on historically dis empowered groups.

This volume, assembled by two law professors who work in the field, is an accessible introduction to this new and growing body of scholarship. It is a resource not only for scholars and students in the fields of taxation and economics, but also for those who engage with critical race theory, feminist legal theory, queer theory, class-based analysis, and social justice generally. Tax is the one area of law that affects everyone in our society, and this book is crucial to understanding its impact.

Editorial Reviews
Book Description
This book represents the first compilation of the key works in the area of critical tax theory. "Critical tax theory" is an umbrella moniker for an area of tax scholarship that examines why the tax laws are the way they are and, more particularly, the impact that the tax laws have on traditionally subordinated groups. The main purpose of this book is to make this new and growing body of work more accessible to those outside of the area.
About the Author
Anthony C. Infanti is a Professor of Law at the University of Pittsburgh School of Law. His work focuses on sexual orientation and the law, paying particular attention to the application of the tax laws to lesbians and gay men. Widely considered one of the leading critical tax scholars in the United States, Infanti's scholarly articles have appeared in, among others, the Buffalo Law Review, the Harvard BlackLetter Law Journal, Unbound: The Harvard Journal of the Legal Left, the Michigan Journal of Gender and Law, the Virginia Tax Review, the Florida Tax Review, and the Tax Lawyer. He is also the author of Everyday Law for Gays and Lesbians (and Those Who Care About Them) (2007). Infanti is the past recipient of an Excellence in Teaching Award from the graduating students of the University of Pittsburgh School of Law, where he is the chief faculty editor for the Pittsburgh Tax Review. He is an elected member of the American Law Institute.

Bridget J. Crawford is a Professor of Law at Pace University School of Law. Prior to joining the Pace faculty, Crawford practised law for more than six years at Milbank, Tweed, Hadley & McCloy LLP in New York City. Crawford's current scholarship focuses on the intersection of gender and tax policy. She has won numerous prizes for teaching, scholarship, and service to the legal community. Crawford is an elected member of the American Law Institute and the American College of Trust and Estate Counsel.