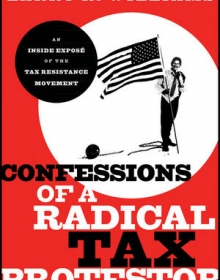 Confessions of a Radical Tax Protestor: An Inside Expose of the Tax Resistance Movement

Larry Williams has never backed away from authority, especially government authority - the U.S. or any other. Including two battles all the way to the Supreme Court.  Libertarian, trader, would be politician, and Indiana Jones-like adventurer, Larry has gone wherever his spirit moved him and bucked state constraints whenever he found them stifling. Throughout his life, his rebellious spirit served him well - huge successes in trading, to adventures right out of a Graham Greene novel in Saudi Arabia, two boisterous runs for the U.S. Senate, a famous actress daughter entangled with an even more famous actor, a new grandchild - the life well lived that would be the envy of most people. Along the way, Larry became a tax protester in the spirit of John Cheek and Irwin Schiff. However, Larry was far too free a spirit to give up his freedom for his beliefs, and figured that he was smarter than the zealot tax protesters now making license plates, particularly after meeting a man with an actual and real document from the IRS acknowledging the legitimacy of a certain kind of trust. But things are not always what they seem. Annoying letters from the IRS called for hiring an attorney to "work things out," which he thought (based on the bills he was paying) was in the works. Enjoying a pleasant flight in first class from South Africa to Australia, Larry, at the age of 64 with a new granddaughter and 5 children settled in successful lives of their own, reflected that life was pretty sweet. Then his plane landed in Australia and he was summarily arrested and jailed and taken to prison There began a nearly 4 year fight for his freedom at a huge financial cost; worse was the toll it took on his psyche. This is the story of Larry's war with the IRS and U.S. Dept. of Treasury and inside view of the world of tax protesters. Larry explains why the tax protest movement exists, where it is dead wrong and why it will most often lead followers to prison. He also weighs in on what can be done to correct the unfairness of the tax codes, and why tax rates are so astronomical, that the 'fair share' idea should be applied to what is the 'fair share' of your income the government is 'entitled' to.

Larry R. Williams is theall-time top winner of the Robbins World Cup Championship of Futures Trading, an honor awarded him for having turned $10,000 into $1 million in less than twelve months. One of the most widely quoted and followed money managers and advisors worldwide, he has been featured in Barron's, the Wall Street Journal, Forbes, and Fortune, among other prestigiouspublications. Famous for his rebellious nature and love of adventure, Larry travelled illegally to Saudi Arabia, in 1988, in search of Mt. Sinai, a story recounted in the bestselling The Gold of Exodus by Howard Blum.

Home  /  Business & Management  /  Special Topics E-BOOK Confessions of a Radical Tax Protestor: An Inside Expose of the Tax Resistance Movement Larry R. Williams ISBN: 978-1-118-03387-6 E-book 256 pages March 2011 US $19.99 PURCHASE THIS E-BOOK This price is valid for United States. Change location to view local pricing and availability. Larger Image Important E-book Information Buy from another retailer for your e-book reader Other Available Formats: Hardcover Description Table of Contents Author Information Introduction. Chapter 1 Don't Tax Me, Tax the Man behind the Tree. Chapter 2 Born a Tax Protester. Chapter 3 Lost in the Desert. Chapter 4 Life on the Run Around. Chapter 5 Getting Out from Down Under. Chapter 6 The Tax Resistance Movement Its Legal “Help”. Chapter 7 Taking the Plunge… Over a Campfire. Chapter 8 When a Fair Share Is Not So Fair. Chapter 9 The Perfect Tax Solution: The Pure Trust. Chapter 10 If at First You Don’t Succeed… Chapter 11 Turning the Wheels of Justice in Your Favor. Chapter 12 Sharpening the Ax: Preparing for Trial. Chapter 13 At Last, Trial Time. Chapter 14 A Workable Solution: A Fair Tax System. Appendix: Right to Speedy Trial Filing. Acknowledgments. Index.