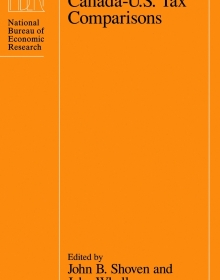 In the increasingly global economy, domestic tax policies have taken on a new importance for international economics. This unique volume compares the tax reform experiences of Canada and the United States, two countries with the world's largest bilateral flow of trade and investment.
With the signing of the U.S.-Canada Free Trade Agreement and the tax reforms of the 1980s, there has been some harmonization of tax systems. But geographic, cultural, and political characteristics shape distinct national social policies that may impede harmonization. As the U.S. and Canadian economies become even more integrated, differences in tax systems will have important effects, in particular on the relative rates of economic growth.
In this timely study, scholars from both countries show that, while the United States and Canada exhibit similar corporate tax structures and income tax systems, they have very different approaches to sales tax and social security taxes.
Despite these differences, the two countries generate roughly the same amounts of revenue, produce similar costs of capital, and produce comparable distributions of income.