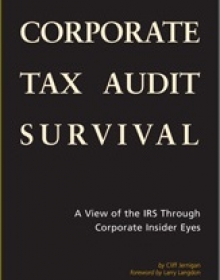 This book is the culmination of Cliff Jernigan's broad education and experiences in both the corporate tax community and the Large and Mid-Size Business Division of the IRS. It is a follow-up to his other published books titled High Tech Survival — The Impact of Government on High Tech and Biotech Companies (1996) and Beyond High Tech Survival — Turning Government Policy Into International Profits (1998), both published by Olive Hill Lane Press.

Jernigan has been associated with a New York City international law firm and has held corporate tax counsel positions at Bank of America, Stauffer Chemical Company, and Castle and Cooke (now Dole Foods). From 1979–2001 Jernigan was Director of Taxes and General Tax Counsel and Worldwide Director of Government Affairs at Advanced Micro Devices (AMD). For the period April 2001–April 2005 Jernigan was in the top management of the IRS, serving on the leadership team of the Large and Mid-Size Business Division.

In April 2005, Jernigan founded his own law firm. The firm concentrates in two areas: federal tax audit strategy and representation before the California Legislature and the U.S. Congress. For more information about Mr. Jernigan’s law firm, the reader can visit his web site at
www.cliffjernigan.com.

Jernigan has been a leader in promoting positive relationships between industry and the IRS. He was a founder and first president of the Santa Clara Valley Chapter of the Tax Executives Institute in 1983, the founder and Executive Director of the Silicon Valley Tax Directors Group from 1980–2001, the Chair of the Tax Committee of the American Electronics Association (1986) and the Chair of the Semiconductor Industry Association Tax Committee (1995–2001).

An accomplished teacher, Jernigan has been a part-time adjunct assistant professor at Golden Gate University over the past 20 years. His classes have included a law school teaching assignment in international taxation and MBA courses on the legal aspects of international business transactions, the impact of government on the high technology community, and government and the legal environment.