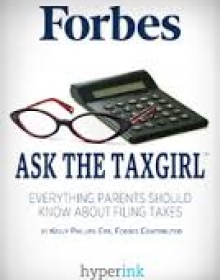 Ask the TaxGirl: Everything Parents Should Know About Filing Taxes

Kelly Phillips Erb is the lady with the lowdown. A parent, well-known tax attorney, and Forbes writer, Erb has been blogging about tax issues at taxgirl.com for years. Some of the questions addressed in this book were posed by parents just like you as part of Erb's "ask the TaxGirl" series on her blog. The rest of the book addresses some of the big concerns parents have when facing up to taxes. Erb lays these issues out in a clear, pro-active manner.
Inside this book, you'll get the skinny on the basics like filing status, claiming dependents, and determining exemptions. You'll also find helpful information about how to deduct expenses associated with raising kids, including the costs of medical care and child care. Erb tackles a number of tricky credits and deductions including the ever popular, and much maligned, earned income tax credit.

EXCERPT FROM THE BOOK
The credit for child and dependent care expenses is available for a parent or parents who work or who are looking for work. The amount of the credit is based a percentage of your work-related expenses and can be up to 35% of your expenses. Qualifying expenses used to calculate the credit are capped for 2012 at $3,000 for one child and $6,000 for two or more children per year.
To claim the credit, you must file a federal form 1040 or federal form 1040A using any filing status other than Married Filing Separately: you cannot claim the credit with a federal form 1040EZ or if you file MFS. You must also file a federal form 2441 (downloads as a pdf).
In most cases, a child of divorced or separated parents is the qualifying child of the custodial parent for purposes of the EITC because of the residency test. The custodial parent is considered the parent whose house was the primary residence for the child during the year. To figure this out, simply count the number of nights where the child slept during the year and the higher number rules. If a child didn't sleep at either parent's house for a night (say he was at a sleepover), you count that night by considering which parent the child would have stayed with except for the sleepover. If you can't figure that out, you call it a draw and no parent claims that night. And if a parent has an odd schedule which calls for him or her to work nights, you count the days instead of the nights (for school days, count the residence registered with the school).

Kelly Phillips Erb is a founding shareholder of The Erb Law Firm, PC, in Philadelphia, PA, where she focuses on tax law for businesses and families. Kelly serves on a number of boards and committees and is an active member of the Pennsylvania Bar Association, where she is as Treasurer of the Solo and Small Firm Section Council; she is also a member of the Tax Section as well as Women in the Profession Committee. Kelly authors the popular Taxgirl blog for Forbes.com; the blog has been recognized by the ABA Journal as one of the top 100 blogs written by lawyers for the past four years running. Kelly has also written and been interviewed about taxes for CNNMoney.com, Reuters, Time, and AOL's WalletPop, and has been tapped for her ability to explain taxes in plain English by media outlets including National Public Radio's Marketplace, ABCNews.com, Esquire, CBS Radio, Marketwatch, Inc., and the Philadelphia Inquirer. Most recently, Kelly was named as a Philadelphia “40 Under 40” by the Philadelphia Business Journal.The 40 Under 40 award, now in its 22nd year, recognizes young professionals in the Delaware Valley for outstanding success and contributions to their community. Kelly is also a mom to three children, so she can add “dinosaur expert”, “cupcake baker” and “princess dress designer” to her resume.