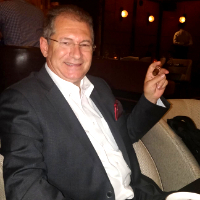 Chris is the Group CEO of Eurofast and he specializes in international tax structuring and planning, including real estate structuring. Chris has over 25 years of working experience in tax consulting, working with local as well as multinational companies. Previously in his career he has served as the European Chairman of the 5th largest international accounting association in the world for Europe, Middle East and Africa (EMEA) Region as well as President of the Junior Chamber International of Cyprus. He is also a member of a number of international trade associations and a Board Member of some house-hold name companies.

Chris is a holder of a Bachelor’s Degree in Business Administration from Southern Illinois University and a US CPA. He has extensive general experience in the countries of South-East Europe and CIS, as well as specific cross-border structuring; joint ventures and M&A experience involving most of the countries in the region.

Chris is a regular speaker in international tax conferences and events, and he is the author of numerous taxation articles published in International press and magazines. He has also conducted over 200 presentations on International Tax Planning, Accounting and Management Consulting in conferences and meetings all over the world. He is also an Honorary Consul of Ukraine to Cyprus.

Eurofast
Athens, Greece
Group CEO, Int'l Tax
Tax, Accounting, Payroll and Consulting firm
Chris is the Group CEO of Eurofast. He was the CEO during all the period of expansion of the organisation including the period from 2004 -2010 that the orgnanisation organically expanded in the Region by opening its own fully-fledged offices from the ground one after the other.

All of our offices are interconnected via state of the art technology and computer systems. Telephony and video conferencing facilities are in addition centralised; server and intranet system ensure that otherwise remote locations adhere to even the smallest detail in our client service and philosophy; thus, making us truly local experts with global knowledge.
BKR International
Paris, France
Chairman
Worldwide Association of Accounting Firms
Chris acted as the Chairman of BKR International, in Europe, Middle East and African Region from the year 2004 to 2006.
He also served for 12 years in the European Board of Directors